Opinion: The typical American couple has only $5,000 saved for retirement

A perverse tax policy helps the rich to save, but doesn't help the rest of us. 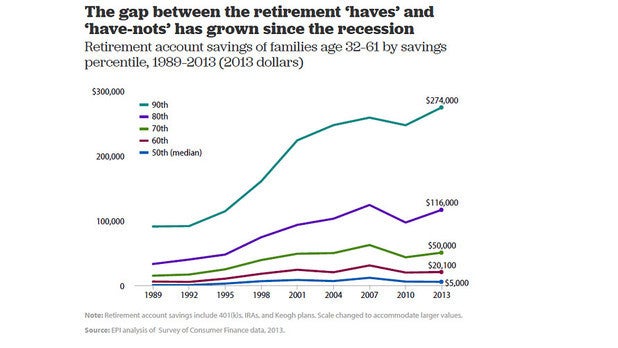 When American companies began switching from traditional pensions to self-directed 401(k)-like plans in the 1980s and 1990s, it was supposed to lead to a golden age of retirement security. No longer would workers be at the mercy of the company's generosity or of Social Security's solvency; workers themselves would be responsible for saving enough for a comfortable retirement.

Some 30 years later, the results are in: The median working-age couple has saved only $5,000 for their retirement, according to an analysis of the Federal Reserve's 2013 Survey of Consumer Finances by economist Monique Morrissey of the Economic Policy Institute.

The do-it-yourself pension system is a disaster.

Even as the traditional company-funded pension has nearly disappeared and even as Social Security benefits are being slowly eroded, most workers haven't saved enough to offset those losses to their retirement income. Seventy percent of couples have less than $50,000 saved.

The sad fact is that most Americans are less prepared for retirement than Americans were 30 years ago. Few have enough pension wealth to make much difference in their lives once they stop working.

The lack of savings in 401(k) and individual retirement accounts wouldn't be a such big deal if retirees could rely on other sources of income, such as a traditional defined-benefit pension or Social Security.

But those other income sources are declining. Fewer and fewer newly retired people are covered by a regular pension that provides a guaranteed monthly check based on salary and years of service. In addition, Social Security benefits are already being reduced as the normal retirement age is gradually increased from 65 to 67.

Further reductions in Social Security benefits — by limiting the cost-of-living adjustment or by increasing the normal retirement age to 70, for example — would be disastrous for tomorrow's retirees.

Social Security remains the largest source of post-retirement income for all but the wealthiest. For those over 65 in 2014, Social Security provided an average of $12,232 per year, about 35% of their income, on average, according to Morrissey's analysis of Census Bureau data.

Earnings from work are the second-largest source of income for the over-65 group, with an average of $10,119. Income from assets (such as stocks and bonds) provided an average of $4,019, and defined-benefit pensions provided about $3,000.

Surprisingly, 401(k)s and IRAs provided less than $1,000 per year on average. Even the top 20% of earners were only receiving $3,000 a year from their 401(k). Not much of a contribution to retirement security, in other words.

The plan that's never panned out.

It wasn't supposed to be this way. The introduction of 401(k) plans, IRAs and similar tax-sheltering savings plans was supposed to ensure that everyone would have adequate retirement resources. In theory, retirees would rely less upon Social Security and more upon their own savings.

It didn't work out. The percentage of families covered by some kind of pension — either defined-benefit or defined-contribution — has declined since 1989. Then, about 58% of working-age Americans had some kind of retirement plan or pension; as of 2013, coverage had dropped to 53%. Just 21% of families had a traditional defined-benefit pension in 2013, down from 41% in 1989.

Among younger workers, traditional pensions are almost non-existent, and yet few younger workers have more than a few hundred dollars saved up. No wonder 40% of millennials say they have no idea how they'll pay for retirement and another 20% say they'll just keep working.

Why are retirement savings so low? Chalk it up to stagnant incomes that make it hard to save, coupled with federal policy that gives a lot of help those who don't need it: the relatively well-to-do.

It turns out that giving a tax break to middle-class Americans doesn't do much to increase their retirement savings. Why not? Because their basic living expenses consume most of what they make each month, so they have little left over. Account balances suffered in the Great Recession because the stock market crashed and many people who lost jobs raided their 401(k) to pay the rent and buy the groceries.

For many working Americans, the tax break for saving for retirement just doesn't add up to enough money to get them to forgo their current consumption. If you're in the 10% or 15% tax bracket like most middle-class Americans, you won't save much on your taxes by putting money in a 401(k) or IRA.

And remember, a large portion of working-class families don't owe any income tax anyway because they don't earn enough. Giving them a tax break for retirement savings is pointless, which is why only 8% of the bottom 20% of earners have any retirement savings, compared with 88% of those in the top 20%.

However, the tax break is a great deal for those in higher tax brackets. According to Morrissey's analysis, the top 10% of earners have put away an average of $274,000 in a tax-sheltered retirement account, helping them to accumulate total net wealth averaging $921,000 (including home equity, brokerage accounts, bank accounts and other assets). The top 1% of earners have retirement savings of more than $1 million.

But these wealthier people probably would have saved just as much money even if they hadn't gotten a tax break, researchers have found.

Everyone else is struggling to accumulate enough wealth to ensure a comfortable retirement. Those with the greatest need have the least saved for retirement. Savings rates for African-Americans, Hispanics, single people and people without much education are extremely low.

There's nothing so unusual about the rich being able to save more money than poor people. But Washington put in these tax breaks to level the playing field, not to make it easier for the rich to get richer. The policy is failing.

And if the plans to gut Social Security benefits are realized, the gap between the few who have a lot and the many who have almost nothing will widen further.

This article was written by Contributor: Rex Nutting,a columnist and MarketWatch's international commentary editor, based in Washington, and.is brought to you by the Ronald J. Fichera Law  Firm, where our mission is to provide trusted, professional legal services and strategic advice to assist our clients in their personal and business matters. Our firm is committed to delivering efficient and cost-effective legal services focusing on communication, responsiveness, and attention to detail. For more information about our services, contact us today! For additional information and free consultation please contact us.

For additional information please contact us for a free consultation.