Commentary: Elites want to cut them because they don't need them. 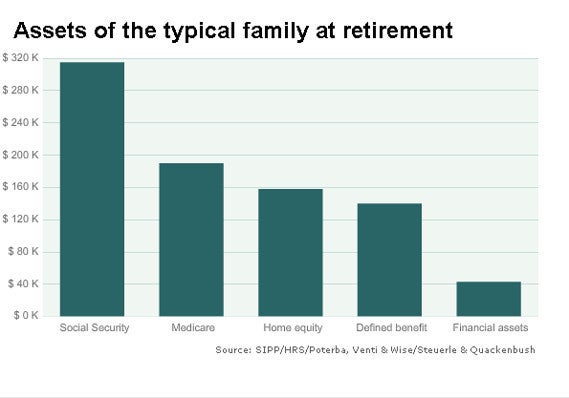 The value of Social Security and Medicare benefits is far greater than the all the other wealth most families have accumulated over a lifetime of work.

WASHINGTON (MarketWatch) — The powerful and wealthy elites who run this country are shocked that not everyone is jumping on their bandwagon to cut Social Security and Medicare benefits.

They view these benefits as abstractions. After all, if you are worth millions, social insurance programs aren't going to matter very much to you.

But a large majority of the American people have a very different view. To them, Social Security and Medicare aren't an abstraction but personal.

They know — without ever quite articulating it in this way — that Social Security and Medicare are the most valuable assets they possess. That's why they are so protective of these programs, despite the best efforts of some to persuade them that the nation's future depends on pruning them back.

For most people, the value of the pensions and health care they'll get in retirement far exceeds the value of all the rest of their wealth, including the equity in their homes, the money they have in the bank, and any funds they've been able to sock away in retirement accounts.

We're conditioned to think of wealth as only what we own personally. But we also have access to a lot of resources that are owned socially, like Social Security.

Unfortunately, almost all the data collected on the subject are limited to personal wealth; social wealth isn't even counted in the two most significant wealth surveys, one conducted by the Federal Reserve and the other by the Census Bureau.

Fortunately, some analysts have tried to put a dollar figure on our social wealth, using a separate survey conducted by the National Institute on Aging, the Health and Retirement Survey. The figures analyzed below mix results from several different studies, so they should be taken as illustrative of the general magnitudes, not as exact estimates.

The latest data on household wealth show just how little personal wealth most Americans have, and why Social Security and Medicare are so vital to their retirement.

At the end of 2011, according to the Census Bureau's Survey of Income and Program Participation, the typical American household had just $67,000 in net worth (assets minus debts). That's the median; half of households had more, and half had less. Excluding the equity in homes, the median net worth was just $15,000.

People beginning retirement had more personal wealth but not that much more — certainly not enough to maintain a middle-class standard of living for more than a year or two. The median household headed by someone 65 to 69 had $171,000 in personal wealth and just $43,000 excluding home equity.

Such families would be destitute without social wealth in the form of Social Security, Medicare and their defined-benefit pensions. The present discounted value of their lifetime Social Security benefits was about $315,000 (according to James Poterba, Steven Venti and David Wise), and the value of their lifetime Medicare benefits was about $190,000 (according to Eugene Steuerle and Caleb Quakenbush). About half of these families also had a defined-benefit pension, worth, on average, $140,000.

If we add up all the wealth, personal and social, the typical household beginning retirement has about $850,000 in assets. That sounds pretty good, but most of the wealth (76%) was held socially, in Social Security, in Medicare or in defined-benefit pensions. Just 5% of the wealth was liquid.

These families rely almost exclusively on the benefits earned in a lifetime of working that were held in trust for them by the government or by a company or union pension plan. (These defined-benefit plans are rapidly disappearing, and few workers are saving enough elsewhere to make up for the loss.)

The fact that so much of this wealth is social wealth, not personal wealth, is a good thing in many respects. Social wealth is a form of insurance. The risks are spread out among many people, not just a nuclear family unit. It insures against longevity risk (the possibility of outliving your assets), market risk (the value is largely unaffected by the temporary ups and downs of the market), and inflation risk (Social Security and most defined-benefit pensions have a cost-of-living adjustment). It also insures against disability.

For the wealthy (the Pete Petersons, the Erskine Bowleses, the Alan Simpsons and the other CEOs, politicians and lobbyists fighting to fix the debt and slash entitlements), it's an entirely different story. They don't need Social Security, or Medicare, because they have enough personal wealth to guarantee a comfortable retirement without it.

The wealthiest 5% of Americans have personal net worth of about $2 million, which means their Social Security and Medicare benefits are simply the cherry on top of their retirement savings. Social Security is what pays the slip fees for the yacht.

And this is the group that's been doing fabulously well since the recession ended. According to Pew Research, all of the nation's increased wealth from 2009 to 2011 went to the very richest Americans. The top 7% of Americans saw their median personal net worth rise from $2.5 million to $3.2 million, while everyone else saw their median personal net worth fall by $79 to $139,917.

Everyone else needs Social Security and Medicare.

This article was written by Rex Nutting, a columnist, and MarketWatch's international commentary editor, based in Washington, and.is brought to you by the Ronald J. Fichera Law  Firm, where our mission is to provide trusted, professional legal services and strategic advice to assist our clients in their personal and business matters. Our firm is committed to delivering efficient and cost-effective legal services focusing on communication, responsiveness, and attention to detail. For more information about our services, contact us today! For additional information and free consultation please contact us.